WELCOME TO THE DOCTOR'S PAGE

Dr Who phone box image by Michael Carroll
I am pleased to be able to announce that as part of the BBC and Puffin Books’ celebration of The Doctor’s 50th anniversary I am the second author to be given the opportunity to bring The Time Lord back to life.

Eoin Colfer kicked off the new series last month with the brilliant A Big Hand For The Doctor featuring the first Doctor. I’ve written about the Second Doctor, which sees him venture deep into The Nameless City…

As a writer and, even more, as a fan it has been a great honour for me to be able to create an entirely new adventure for The Doctor.

There is very little I can tell you about The Nameless City, except that it is set in 1968 and takes place just after the classic episode called Fury from the Deep and just before The Invasion.It features Patrick Troughton’s Second Doctor and his companion, Jamie McCrimmon (as played by Frazer Hines).

Eleven Doctors, eleven months, eleven stories: a year-long celebration of Doctor Who! The most exciting names in children’s fiction each create their own unique adventure about the time-travelling Time Lord.

Dr Who & The Nameless City was published as an ebook on the 23rd February. In December 2013 all eleven stories will be published in a bound volume. 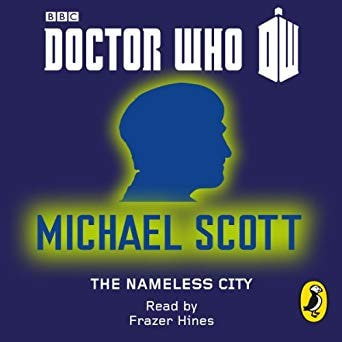 I would argue that Patrick Troughton was one of the most important and influential Doctors – and I’m not just saying that because he’s “my” Doctor, nor am I alone in that assertion. Steven Moffat revealed that Matt Smith recently claimed Patrick Troughton as his favourite – and it is also clear that his chosen costume is an homage to Doctor Two.
Matt Smith is not alone in his admiration of Patrick Troughton: Christopher Eccleston, the Ninth Doctor, referred to him as “the great” and Jon Pertwee was a huge fan. William Hartnell, the first Doctor, personally recommended Troughton as his successor.If William Hartnell created the Doctor, then Patrick established the character we know and love today. When Troughton took over the role, he was about to do something which had never been done before: replace an actor on a popular series.
No one knew how the audience would react. He could have chosen to play the character in the same way, but instead he created an entirely new Doctor, not only in appearance, but also in speech and mannerisms: the “cosmic hobo.” It was a huge risk. If he had got it wrong, The Doctor would not have continued.

The Doctor was also my introduction to the world of science fiction. I was lucky to be growing in an age when the works of the masters of science fiction were still available and in just about every second hand bookstore and library. The Doctor led me to Isaac Asimov and Robert Heinlein, Robert Silverberg and Harry Harrison, EE Doc Smith and EC Tubb, Harlan Ellison and Ray Bradbury and ultimately to the works of Andre Norton, who was a huge influence on my early work. But it began by watching Dr Who and wondering was there anything else like that out there…